Today was a day of music and songs. Both things important to Jennifer. She made up her own songs and she loved to sing along with ones we were listening to.

We have been continuing the sticker charts for the boys. Even though last night wasn’t a stellar performance we took them out for breakfast this morning since they had already filled theirs up. We didn’t give them any for last night (but we didn’t point that out either) we felt like showing them the reward for earning a “going to bed” sticker will be a good motivation.

We went to Black Bear… the same place Tony and I went to the day I broke down in the parking lot.  We took my car. The first time since she died we have all been in it. Jonathan didn’t want to.. well .. because daddy’s car can go faster… Buckled in he said I miss sissy. But we carried on.  On the drive we heard Brave. Tony said he doesn’t feel a strong connection to that song. Its the one we played at the end of her services (which I haven’t watched yet. Plan to do it this Friday then post)

Breakfast Jonathan made me proud. He is stepping up and helping his siblings the way Jennifer did. Nicholas started to cry when Jonathan got the blue balloon…the color they both wanted. Jonathan gave it to Nicholas. We told him he didn’t have to, but he wanted to.

While Tony buckled the boys in (actually Tony and Jonathan since he helped Nicholas) I read my email.. a note from a friend had me choking up. About how Jennifer is like glitter…you can’t forget her…that glitter never goes away… 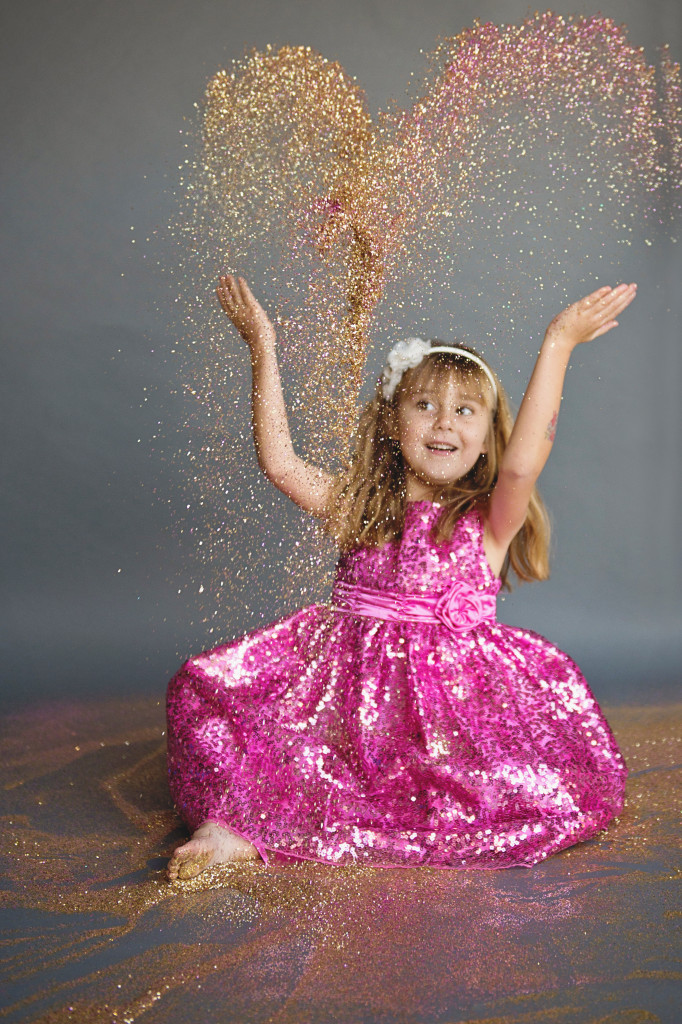 Tony started the car and Roar was already playing. I almost chose this as the end to her services… but opted not to. This was Jennifer’s favorite song. We used to substitute words for her when we sang it at the top of our lungs together. I am glad I didn’t use this one.. . its kept it a more personal anthem.

We took my car through a car wash. Nicholas got a little freaked out but Jonathan told him it was funny… . and to Nicholas, that meant it was funny. I am glad we did it.. but it was a little hard to see the remnants of the cherry blossom tree washed 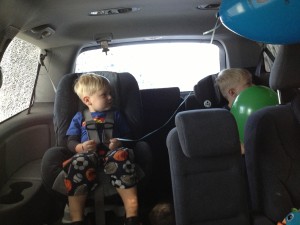 away. . just the outside was enough for today.

We took the boys to my parents since we had an appointment scheduled for the mortuary a little later in the day. On the drive I called her hospice care facility. This morning Jonathan asked if he could go to a “talk doctor”. I said yes and asked about going back to his old one. He said no. He wanted a new one. One he could just talk about Jennifer with. This kid.. his emotional intelligence is startling sometimes. I had spoken with the people at hospice about seeing him while Tony and I go to a child loss support group… so after his nudging earlier I decided it was time to call.

On hold there is music. Just instrumental. Tears. I couldn’t handle it, it reminded me too much of the calls we made . . the final one nearly 5 weeks ago. . .

..she is still throwing up.. another headache.. . I think she is having seizures.

That music sent me whirling right back.

Later driving in the car Brave came on yet again… I do love how often we hear “her songs”. we also heard “let her go”…the song we walked into her services with. I told Tony I wanted to turn it up even though it didn’t do the same thing for him.. I turned it down at one point just to tell him that I feel like this song is now from her to us. At one point it was me to her.. then my brother to me… now its her to us.

Oh how I love this man.

(and if he is extra nice tomorrow I will know he broke our rule and read the blog!!) 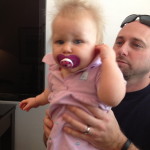 At the mortuary the smell was so strong. It reminded me of when I went there to see Jennifer in her casket. I sat down and started to feel that familiar swim in my head..  lightness taking hold. Luckily they came to get us and in the office the smell wasn’t so overwhelming. We had baby Charlotte with us. I am so thankful for her. She forces us to do something in the hardest moments.. we have to take care of her. Tony and I talked today about getting to still raise a girl even though our daughter is gone. How lucky we are… but also what we think will be hard.

For me, its that she should be doing things with me for Charlotte. When I will put Charlottes hair in pig tails the first time Jennifer should be there. We should look back at pictures from the first time I did it for Jennifer. It was fathers day..Tonys first one she was 2 months younger than Charlotte is now.. 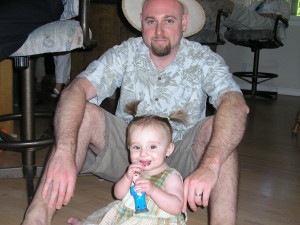 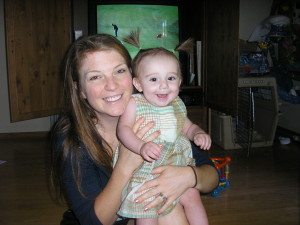 We planned out her headstone. Excited isn’t the right word…but maybe it is. I liked getting to talk about it and plan it out. To be just what we want. Personal. Meaningful.

Planning something for her makes me feel good.

Right after we left we got a call that our credit card was compromised. Luckily they didn’t freeze the account before we paid our bill at the mortuary, we were literally in the parking lot of the place though!

At one point, a little earlier in our day, my phone rang.. it was hospice calling to see if we were still considering joining the support group. We were and tonight we did.

Tony was fairly resistant to the idea but open to giving it a shot. My parents kept the boys and my sister took the baby. Next week Jonathan will come with us to have his own appointment. We were both pretty nervous. I was a little taken aback by how nervous I was.

…it was good. I think better even for Tony than me. We will be continuing to attend.

Afterwards we went out to eat. I had mentioned a random resturant from our past…our pre-celiac days that we loved. Tony and me… and Fairy too. A buffet place with salads and loads of carbs. We went before Jennifer and with her. We would talk about how we were going to take all our kids here as our family would hopefully grow.

There was a kid there.. maybe about 10 with a feeding tube. With hair that appeared to be growing back in. It was jarring. How it seemed to pull me back into my memories.. I think I stared as I walked past. In the restroom I thought well if they ask I can say..I’m a cancer mom.. but then I realized I really can’t. They would never want to hear from me. There would be no bond. No comradery.

I am their nightmare.

When I walked past again I kept my head down.

Almost home we were talking about ideas for the non-profit… Specifically about our desire to spread awareness…familiar notes started filling our car.. .  ones I had never heard on the radio.

“The snow glows white on the mountain tonight,
not a footprint to be seen.
A kingdom of isolation and it looks like I’m the queen.
The wind is howling like this swirling storm inside.
Couldn’t keep it in, Heaven knows I tried.
Don’t let them in, don’t let them see.
Be the good girl you always have to be.
Conceal, don’t feel, don’t let them know.
Well, now they know!

It’s funny how some distance,
makes everything seem small.
And the fears that once controlled me, can’t get to me at all
It’s time to see what I can do,
to test the limits and break through.
No right, no wrong, no rules for me.
I’m free!

My power flurries through the air into the ground.
My soul is spiraling in frozen fractals all around
And one thought crystallizes like an icy blast
I’m never going back; the past is in the past!

Let the storm rage on!
The cold never bothered me anyway…”

I sat in the car in our driveway and let the song finish out. It meant something else to me before.. when I considered using it at her services. I have a feeling the meaning of these lyrics will constantly change.

Tonight it spoke to me. .

Of such power. Of strength. Of steadfastness.

Of who I want to be now.

A voice that cannot be quieted in the fight against childhood cancer.

When I was Charlottes age. The prognosis and treatment for DIPG was the exact same as it is now, I would have gotten the same treatment as Jennifer.

In 20 yrs only two new cancer drugs have been approved specifically for pediatric use. (in case your wondering 23 for adults in 2012 alone)

Glitter sticks to you…you can’t wash it off. .

Its the same and now we know… 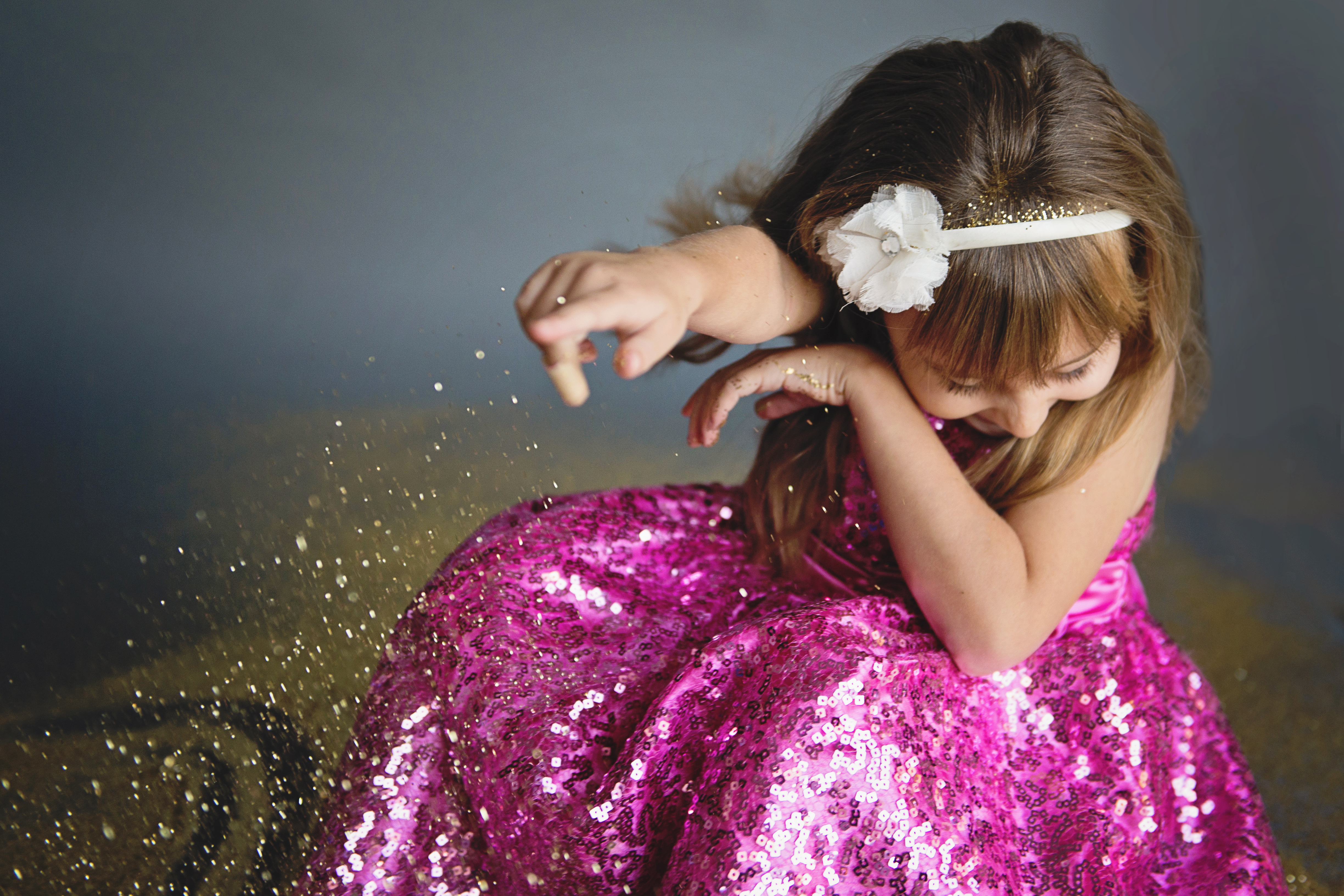